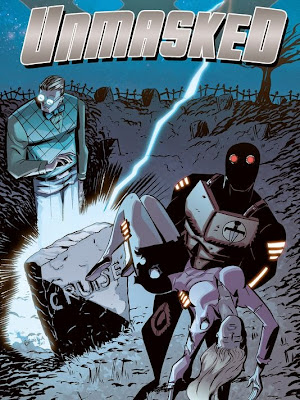 
In a town full of evil guys, a hero looks like one of the baddest dudes around.

The second issue of Arch Enemy Entertainment's Unmasked superhero series ended with Dagger II kidnapping the old love of the original Dagger, and more cliffhangers and reveals are in store for the next chapter.

Every Monday, USA TODAY will exclusively present new pages from the second issue of Unmasked, by writer Sarrao and artist John Broglia.

The New Age Heroes — current versions of Seastone City's old-school do-gooders — continue their battle to execute the king of supervillains, the powerful Victor Vance, and reporter Paige Cruise is still on her quest to unmask these "heroes."

Nightprowler dropped the bombshell that he believed Paige's father, Douglas, was actually Dagger II, Sarrao says. "Paige, horrified to hear that her father could be this maniac, becomes obsessed with finding answers."

She'll get them, though one big mystery is the disappearance of Bess, the original Dagger's girl who's been nabbed by the new Dagger.

Nightprowler will take Paige to where the original good guys "died," the New Age Heroes battle Freddie Normand's robot army, and Dagger II stays mysteriously absent for much of the issue.

"Dagger II will do something in this issue that will prove his relentless dedication to kill Victor Vance. It's the kind of action that will surprise even his teammates."

In addition to seeing who was involved and the results of the epic battle that led to the disappearance of the old heroes, the liquid-metal villain Silver makes a short yet memorable appearance, and Dr. Fosselli proves a challenge for the New Age Heroes.

"Not to give too much away, but let's just say his favorite TV show is probably Star Wars: The Clone Wars," Sarrao says.

Meanwhile, his daughter Elisha Vance doesn't want to take the reins of the "family business" from her father, Victor, but when an army of superheroes want to kill him and tear their building down, there's no way she won't act, according to Sarrao.

"Her father has done horrible things over the years and created some devastating weapons. As a result, she does have these things at her disposal and will have to decide whether or not to use them," the writer says.

"She's hoping Victor's villainous friends will put a stop to the New Age Heroes so they don't have to force her hand and make her use the 'secret weapon.' And let's just say, the secret weapon is a last resort due to its destructive power. Whoever wields this power can truly rule the world."

Nightprowler is the guy who will educate Paige on her dad's involvement with Dagger II. Douglas Cruise left his kid when she was just 10, and Paige always feared he might be head but being a masked man might be a worse fate in her eyes.

He is also the man with the knowledge of the ultimate whereabouts of the original heroes.

"We'll learn how an entire generation of superheroes was wiped off the face of the planet in one fell swoop. It's literally out of this world," Sarrao says. "Both of these reveals are shocking and will carry our story over to the climax in issue 4."