Bet You Can't Read This Post Without Going, 'Awww' Barbara O'Neal, author of The All You Can Dream Buffet

My favorite childhood toy was a stuffed tiger my Uncle Tony gave me either before he spent a year in Madrid studying Spanish (I remember him, a tall youth with enormous hands, holding several kittens in his palms before he left). The tiger was my treasured possession because I was the Cat Girl, and I slept with it every night until it was loved as Real as the Velveteen Rabbit. The poor thing has no eyes, only the red nose that's embroidered on. He now keeps company on a shelf in my house with Hobbs, the tiger my son was given when he broke his arm gruesomely at age 7. Hobbs still has his eyes, but he's nearly rubbed bare with love and hugs.

My favorite childhood toy was this giant multicolored stuffed dog that I named Rainbow. My dad carted it back on the plane from Vietnam for his newborn daughter (me) and it quickly became my favorite toy, and the one thing I couldn't live without. He slept on the end of my bed, as if he was a real pet, and was my confidante through all those difficult teen years. When I was about 30, it finally fell apart and I had to get rid of it, but even now when I think of Rainbow, it makes me feel like a kid again.

My favorite toy was a tiny koala bear that could clip onto things. When my cousin and I used a play kitchen set as our veterinarian office when we pretended we were veterinarians, this tiny bear was my No. 1 patient. He was very quiet and never complained. ;) 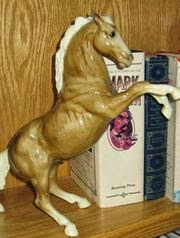 
Justine Davis, author of Lord of the Storm (June reprint)

My favorite childhood toy was a gift from my sister, the only person who really understood that, yes, I wanted a REAL horse. She couldn't quite manage that, so she did the next best thing and got me a Breyer palomino that I played with for hours, making up stories about where he came from, and, of course, the little girl who tamed him. (Strangely, she looked a lot like me.) And therein lie the seeds of the writer to come! My parents assumed I would outgrow this passion, but I never did. I eventually got the real horse, two in fact, but this is the one I've kept forever.

And he is still on a shelf in my living room.

Nona Raines, author of His Kind of Woman

One of my favorite toys as a child was my Shirley Temple doll. I got her for Christmas when I was 5 or 6 years old. I wasn't around in the 1930s, when Shirley's popularity was at its height. Instead I saw her movies years later, on television. I was entranced with her in the movie Heidi, and still remember how frightened I was by the scene where it looked like Heidi and her grandfather would be separated forever. My Shirley doll was dressed as Heidi, dirndl, apron and all. And of course she had those trademark blond corkscrew curls. As much as I loved her, poor Shirley didn't fare very well — we were rough with toys in my house. After a while her dress got lost, her curls were cut off (my sisters and I were fiends for cutting dolls' hair) and Shirley found her way to the bottom of the toy box. Gosh, I was a fickle little kid!

Erin Quinn, author of The Five Deaths of Roxanne Love

My favorite childhood toy was a stuffed lamb named Lambsy. (Yes, even then I possessed that razor-sharp creativity, ha ha). Lambsy was so soft, had pretty eyes and a bell on her tail. I don't know why she was my favorite, but she is one of the few things from my childhood that I still have. I thought maybe my own children would love her as much as I did, but they never found her more than a curiosity. Maybe someday a grandchild will give her the love she deserves. 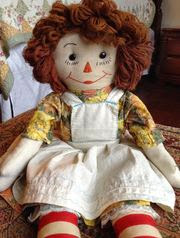 My favorite childhood toy is a Raggedy Ann doll. She is old and a bit worse for wear, but I treasure her. When I was young, my family, once a year, drove up into the mountains to an outdoor art festival called Plum Nelly. The community got its name because it is plum' out of Tennessee and "nelly" out of Georgia. My mom and dad had four kids and a tight budget, so going to Plum Nelly was more about the experience than about purchasing art. The event was a juried show. The offerings of painting, pottery, woodcarving, etc., were made by master craftsmen. In my memory, the cold October days were always blue-skied and wonderful. Church ladies had a booth where you could buy hot cider and the most amazing homemade cakes and other goodies. If the weather was really brisk, folks would huddle around fires in big oil drums. Though I don't remember all the details, I know I had seen the toy booth more than once and yearned to take home a doll of my own. My birthday was in November, so one year, my parents gave in and bought me one! She is handmade down to the tiniest detail in her face and dress. When I look at Raggedy Ann, she takes me back to wonderful times with my family...

Mimi Jean Pamfiloff, author of The King Trilogy (May 15)

I had many cool toys growing up — The Strawberry Shortcake doll collection, a pogo stick, Betty Crocker Easybake Oven — but my fave was definitely Baby Cut-And-Grow. If no one remembers, it was a chubby-looking baby with a ball of yarn inside her head. The yarn came out of a hole at the top so you could cut it and then pull out more hair to create another fabulous hairdo. Sadly, I seem to remember that my Baby Cut-And-Grow just kept getting the odd-looking Mohawk. Perhaps it was a foreshadowing of the rebellious years to come! Oh, my poor parents. LOL.

Check out earlier posts about authors and their favorite childhood toys here, here, and here.

And come back to HEA next weekend for more! 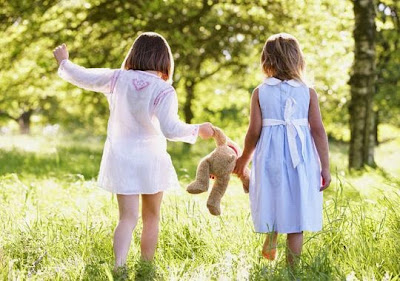 For some of us, teddy bears were our first best friends.(Photo: Getty Images/Monkey Business)


*Blogger's note: If you read my message from the last installment of this, you know Barbie was my favorite and when I was very young, I did not have any favorite toy. Especially stuffed animals. I remember having a lot I slept with but not a special one. My mother remember EVERYTHING about me so since she came over for Easter, I asked her if I had a favorite toy when I was little. She said just all of my stuffed animals but I did not have a favorite. I started playing with Babies early. But seeing the above pics, I remember I LOVED Raggedy Ann and Andy because my room was done in that and I loved my Raggedy Ann doll I took it everywhere. I am surprised my mom forgot that. But I read books that went along with Raggedy Ann and Andy also. There was a series. It was always about books.
Posted by Mollydee55 at 10:08 PM