A Week of Comics Events Kicks off MoCCA Arts Fest 2014

(from publishersweekly.com
by Calvin Reid) 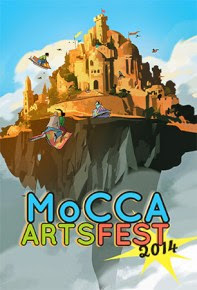 The MoCCA Arts Fest, an annual festival of small press and self-published comics, opens this weekend April 5 and 6 at the Lexington Avenue Armory in New York City, its second year under the direction of the Society of Illustrators. Besides reducing the admission fee, this year’s MoCCA Art Fest will feature special guests Alison Bechdel, Fiona Staples, Howard Cruse and Robert Williams, and Comic and Cartoon Art Week, a new series of comics-related events slated to take place in the week leading up to the festival.

The Society of Illustrators, which took over the assets of the Museum of Comic and Cartoon Art last year, including the annual festival of indie comics, moved quickly to upgrade and revamp the MoCCA Arts Fest, providing financial stability as well as adding a variety of new features and amenities to the show, such as a café, an exhibition and show prizes. Last year’s revamped MoCCA Art Fest drew praise from fans and exhibitors.

This year, SoI executive director Annelle Miller said, SoI was looking for new ways to make the show, “even more exciting,” so she decided to go out and get a giant Macy’s Thanksgiving Day parade balloon for the show. Yes, that’s right, this year’s MoCCA Arts Fest will feature the massive Charlie Brown balloon from the annual parade suspended from the ceiling of the Lexington Avenue Armory. “We reached out to Macy’s. It took time—we’ve been working on this for a year—and we had to get sponsorships to cover the costs, but Charlie Brown will be hovering from the ceiling at the Armory” Miller said.

This year the show is also reducing the admission fee from $15 to $5 per day—“to encourage fans to buy more comics” on the floor, Miller said—moved the café to the Armory’s main level in the rear, and moved the MoCCA exhibition space from the rear of the main level to the front of the hall near the entrance. This year the show will feature a “Kids’ Zone” and a kids book giveaway. And a number of publishers will debut books at the show, among them, Climate Changed: A Personal Journey Through the Science by Philippe Squarzoni (Abrams ComicArts), World War 3 Illustrated: 1979-2014 edited by Peter Kuper and Seth Tobocman (PM Press) and Children Are Naughty by Vincent Cuvellier and Aurelie Guillerey (Nobrow Ltd., Flying Eye Books).

This year, SoI has also organized Comic and Cartoon Art Week beginning April 1, which will feature a week of events leading into the MoCCA Arts Fest opening on April 5. Among the many events slated are the New York Comics and Picture Book Symposium, a panel held at the School of Visual Arts; book signings at Midtown Comics, Desert Island Books, the Strand, Bergen Street Comics and elsewhere, and a screening of a documentary film on cartoonist/painter Robert Williams at SVA. In addition, Comic and Cartoon Art Week will feature The Draftsman Congress, an event held in conjunction with the New Museum and The National Cartoonists Society that will feature NCS members working on a giant drawing as part of an exhibition at the New Museum. And those are just a few of the events that will be held during the week.

“We do something similar during illustration week so why not do the same thing for comics,” Miller said. “This is the first Comic and Cartoon Art Week and next year it will be even bigger.”


*Blogger's note: I may be going to this. I have to see how I feel. However I encourage everyone that has the means to go. Some of my friends have a booth there and they are excellent illustrators. Their works will be on display. I had them on my blog for an interview for a comic book they wrote/illustrated The House of Feasts. So show your support for all the illustrators!
Posted by Mollydee55 at 7:57 AM