Hello my dear readers! Today is going to be a lot of fun. I get to talk about not just a great writer, but a personal friend of mine, R. Scott Boyer. I have an amazing post to share with you from him but--first I want to tell you briefly how Scott and I met.

There have been a lot of changes in the book world since I was forced to stop reading in 1999 due to my health. The biggest changes being access to e-books, as well as the ease which with you can communicate with other readers and even with authors. With these goals in mind, I joined Goodreads.com back in mid-September and immediately I began building my profile, making friends, and writing reviews. I scoured the site looking for free books and book giveaways to get my hands on as many new books as possible.

On October 6th, I noticed a post by Scott in one of the forums with an offer for a free copy of his book, Bobby Ether and the Academy (http://www.amazon.com/Bobby-Ether-Academy-Scott-Boyer/dp/1482084821/ref=sr_1_1?ie=UTF8&qid=1385829589&sr=8-1&keywords=bobby+ether+and+the+academy). Well I was I ecstatic! I had noticed lots of authors giving away e-books, but felt left out because I had no Kindle or Nook or anything. Scott’s offer didn’t specify, and I had high hopes of getting my hands on an actual hardcopy of a book finally. So I wrote Scott and told him I was interested in his book, along with most of my life story, lol!

That same day I got a lovely letter back from Scott stating that he thought my story was moving, and that he too suffered from a variety of ailments, including debilitating headaches, which I also suffer from. We found a common link in our suffering. He went on to explain that his offer had been intended as an e-book only, but that because of my situation, he was going to make an exception and send me a hardcopy of the book. Scott also offered to reach out to another author and friend of his, Jennifer Niven, and see if perhaps she would be willing to send me a copy of one of her books. I’m happy to report that she sent me a copy of The Aqua Net Diaries which I devoured and loved! You can find Jennifer here: http://www.jenniferniven.com/

Nowadays, Scott and I write back and forth almost everyday. He is very wise, very comforting, and sweet––confirming what I suspected when he first agreed to send me his book: Scott is just a really good man. The Academyarrived on October 12th, and I was so excited to receive it and hold it in my hands. I love the cover! I could not put it down. I stayed up late at night reading it after spending all day reading other books I had agreed to read for R4R. I finished ten days later. I loved Bobby Ether and the Academy. I did a complete review that can be found on Goodreads here: (https://www.goodreads.com/review/show/735511895), as well as posted to Amazon here: http://www.amazon.com/review/R2P6R58SG1CM7W/ref=cm_cr_rdp_perm . I want everyone to know about this incredible book. I have also recently posted it on Booklikes (http://mollydee5.booklikes.com/post/697251/bobby-ether-and-the-academy-by-r-scott-boyer). 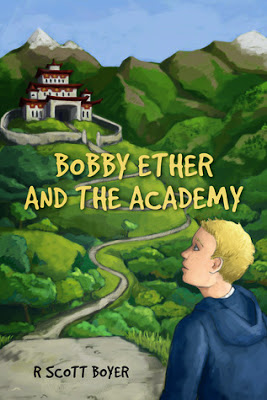 Scott and I talk almost every day still. As I have started this book blog, he has been invaluable with suggestions and constructive criticism. I offered the same for his second book, but it is perfect so far! I am proud to call Scott my friend, and I believe he feels the same about me (He really does!) :) Scott has a blog on his website where he has posted some great articles. When I read it, I was attracted to one in particular called "The Multiverse." I told Scott how much I liked it and he offered to allowed me to re-post it here. So without further ado, here is "The Multiverse" by R. Scott Boyer:


The MultiVerse (The Awesome Power of ‘Save As’)

One of the biggest fears many writers have is the fear of not getting it right. Often times, this anxiety can be so debilitating that the story grinds to a halt, the author unable to progress because the story’s current status isn’t perfect (perfection is a myth, but that’s a post for another time). The purpose of this post is to assure my fellow writers that there is a way to escape the incapacitating fear of imperfection. I call it ‘the multiverse.’

The multiverse is the multitude of universes created by alternate versions of the same story. Here’s how it works: Any time I feel like something I’m working on is less than perfect crap, I either make a new document to work on a specific section, or ‘Save As’ and create a whole new draft. Now I’m free to beat, bludgeon, and disembowel the scene I’m working on without fear of harming a single ‘verse’ in the prior draft. Heaven forbid the new version ends up worse than the original, I just start over again with another draft in another alternate universe.

I confess it’s not always as easy as it sounds. Like many authors, I frequently get attached to my writing. Scenes written in the pool (see my post about this here) are especially dear to me, which makes deleting them especially gut wrenching. Thanks to the multiverse, I don’t have to. Whenever I feel the need to carve out or trim down something I really like, I simply make a new file.

Now, all those alternate events still exist. Bobby and Jinx have had dozens of adventures that didn’t make it into the final draft of the Academy. In my first full version, I had a sixty-page section in which Bobby and his friends explored additional levels of the Archives, discovering ancient catacombs and an old headmaster’s crypt. Later, Bobby and the gang got caught and sent to the mines (again). There, Ashley locked Bobby inside a sealed chamber and deactivated the hydraulic door, causing it to explode under the geothermal pressure, nearly burying Bobby alive.

Due to length, I condensed this section following my second draft (the book was 131k words at the time), but those earlier versions still exist. In the multiverse, Bobby and his friends still find Master Jong’s scroll-copying station tucked away deep in the catacombs, and Jinx’s imagination still runs wild, convincing him that a hooded Master Jong is really a ghoulish apparition.

The bottom line is that, courtesy of the multiverse, nothing is every truly gone. All of those wonderful adventures still exist, like actors frozen in time, ready to resume as soon as their audience returns.

So the next time you’re struggling with what to write next, or afraid to mess up what you’ve already got, take advantage of ‘Save As’ and expand your multiverse. Then go ahead and explore the possibilities risk-free. I think you’ll be pleased with the results.

For anyone interested, my book, Bobby Ether and the Academy, is a young adult adventure story that blends urban fantasy with new-age/spiritual fiction (Think Harry Potter meets the Celestine Prophecy). It’s full of excitement, mystery, and just a hint of magic. More information can be found on the Facebook page, or on the about me section of this site

(Since this was taken from Scott's site I encourage you to go to Scott's site yourself: http://rscottboyer.com/ and visit Scott's Facebook page: https://www.facebook.com/BobbyEtherAndTheAcademy

And I would also to wish Scott a Happy Birthday!!!! We spoke on his birthday which was Wednesday. He had a great time celebrating. I do not know if he wants me to tell his age but he does not look it :) So everyone, even if you do not comment to me, go over to Scott's site or Facebook page and wish him a Belated Happy Birthday!!
Posted by Mollydee55 at 12:34 PM