Today we have with us Marianne dePierres. We met a while ago and wrote each other a bit and I asked her if she would like to write a guest post for my blog and luckily she said yes. You can read more about Marriannne at the end of the post.


Mixing SF with other genres is one of my favourite writing pastimes. I’m a futurist at heart, I think. I get excited about possibilities and projections.

Somehow, blending SF with the past doesn’t hold the same allure, which is why I have never written any alternate history or steampunk. If you can imagine a dog on the back of a trayback, nose into the wind, straining to see what’s coming, sniffing the air, eager for the scents of the wind: that’s me!

I’ve written a few genre blend novels now. The PARISH PLESSIS and the PEACEMAKER series’ blend crime with SF. The GLITTER ROSE collection and the NIGHT CREATURES series are science fantasy, and the TARA SHARP series is paranormal crime. I often begin a novel, thinking it will be a single genre story, but without fail a SF element creeps in. I just can’t help it. It always seems so much more interesting that way. For a start, you get to make things up! But it also requires that you do a bunch of research on interesting topics, and then apply your imagination to how technology and theories may have changed ten, twenty or thousands of years in the future. It’s also a great way to reflect on the potential evolution of the human race while grounding those ideas in other genre tropes. Not only does it make SF entertaining, but it, in some ways, helps readers of other genres to relate to it.

With PEACEMAKER, I have taken it a step further and blended Urban Fantasy, SF, Crime, Westerns and Australiana into one story. It was challenge, for sure, but it was FUN!


About Marianne: Marianne de Pierres is the author of the acclaimed Parish Plessis, the award-winning Sentients of Orion science fiction series and the upcoming Peacemaker SF Western series. The Parrish Plessis series has been translated into eight languages and adapted into a roleplaying game. She’s also the author of a teen dark fantasy series.

Marianne is an active supporter of genre fiction and has mentored many writers. She lives in Brisbane, Australia, with her husband and three galahs. Marianne writes award-winning crime under the pseudonym Marianne Delacourt. 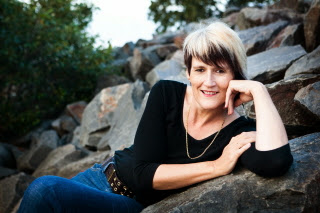 
I want to thank Marianne for her great piece and for her being here today. I hope she will come back again. I appreciate her being here.