Today I am here with author A.J. York. I met her when she sent me a friend request on goodreads. We talked a little bit and she was interesting and I decided to ask her to come on my here to do a blog post. And here she is. A little more about A.J.:

First let me introduce Grumpy Stone (see picture below).  I found him on a beach in my home town in Essex, England. Grumpy has become my writing mascot and inspiration for the character Grumpy Sponge. It is more fun to look at a picture of him than one of me. Promise.

About me? Well I grew up in the UK, but was born in Gothenburg, Sweden. My childhood influences were a mix of Pippi Longstocking and The Flumps. I have always enjoyed making up characters and their life stories, therefore I jumped at the chance to study theatre at the University of Brighton. I later trained as a drama teacher and I have a Master's degree from Goldsmiths. I have gone back to my roots and I now live in Gothenburg, where I am writing the Delilah Dusticle series. People have told me they love reading my stories and I hope you have fun reading them too!

Things I like? Swedish cinnamon buns, yoga, tea, salt liquorice, sleeping on boats, compassion and other people's creativity. Things I do not like? Okra. The vegetable is also known as ladies fingers, which makes them even less appetising to me. Blah!


Where do ideas come from?


I am often asked what inspired me to write Delilah Dusticle and when did I know that I wanted to be a writer. I have answers about the circumstances that inspired the idea of Delilah Dusticle, but not where the idea actually sprang from. The origin of innovation intrigues me, and I am grateful to Mollydee for giving me the opportunity to make a modest investigation into this subject matter.

Here is the answer I give when asked where I got the idea of Delilah Dusticle from. I was cleaning a flat I had been renting. It was a beautiful old flat that had a room off the kitchen, where a maid would have once slept. I was cleaning the wall to wall bookshelves unsuccessfully with a hoover and a duster. Rather than being picked up by the duster or the hoover, the dust just seemed to disperse into the air, floating silently in the sunlight. I sat against the bookshelves defeated, and my mind began to wonder. I started to think about what the maid that once lived there might have been like. I also considered that she must have had special cleaning powers. Suddenly, voila, Delilah was running up the wall duster in hand eradicating dust.

If I am honest, I am not sure if I am being honest. I might just have used this set of circumstances in order to provide a quick answer. I do remember that it was long after moving out that I actually sat down to write about her and that I did not have the whole story straight away. It appeared over time on the screen in front of me. The experience of cleaning definitely influenced me getting the concept of Delilah Dusticle, but it was not the be all and end all of the idea itself.

I decided to do a brainstorm where ideas come from.


· Ideas come from experiences that have happened to me, i.e. what I know.

· Ideas come from what I think I know and what I imagine, i.e. what I have read, seen or heard.

· Ideas come from a stimulus, triggering a memory or new thought.

· Ideas come from connections, someone says something that expands on or triggers a new thought.


At this point I couldn’t help but feel I was only scratching the surface and decided to dig further. After years of university education, training to teach and teaching the value of good research to my students what did I do? I typed the question into google of course. Do this yourself and you will find masses of material on the subject. I have to confess I did not read them all. The ones I did read had many opinions about how to have good ideas, but no one seemed to have the answer of where they come from.

What I did find however, was author Neil Gaiman’s essay on where his ideas came from. Gaiman’s journey on how to answer this question starts with a series of funny quips, but then becomes more serious as he explains ‘Where do I get my ideas from? I make them up. Out of my head.’ Gaiman also raises the notion of writers having heightened awareness of experiencing their ideas. ‘You get ideas from daydreaming. You get ideas from being bored. You get ideas all the time. The only difference between writers and other people is we notice when we're doing it.

While I was studying for my Master’s degree I was looking at countries and why some were deemed to have more creative output than others. This included music, art, tv programmes, film, writing, graffiti and so on. I remember my professor discussing how the best creative work comes from those who are on the edge in some way. Countries or citizens who lead a comfortable life are less likely to produce gritty, interesting or reflective work. They have nothing to protest about, they have no deadline to meet and they have no fear to conquer. When you have everything, there really is no need for invention.

Even Gaiman mentions this concept of being on the edge. He says desperation, deadlines and boredom drives him to have ideas and write them down. At the time of creating Delilah Dusticle I was certainly unhappy with the progress of my career, and I was bored. Looking back I must have been seeking something to engage with. I also recall the deadline for my university degree show, many years ago, being imperative to how I worked and how the urgency inspired me to create.

You can read Neil Gaiman's short essay Where do you get your ideas? By clicking here: Neil Gaiman.

Another result on the google search was Steven Johnson’s Ted Talk, which looked at how to have good ideas. Johnson addresses the notion that ideas come in a flash or eureka moment. He challenges this view by stating that ideas usually have a period of incubation and are part of a network, rather than just a singular moment of genius by one person. When I reflect on the process of creating Delilah Dusticle, it certainly has involved a period of incubation for each book. The story did not just appear fully formed. It took months of reflection. I also discussed everything with the illustrator, who in turn became part of my network and fed me with lots of fresh ideas of how to move the story forward. I may have had the idea, but I am not the only one behind the final product. You can watch the full Ted Talk by clicking here: Ted.

The second part of the question about when did it occur to me that I wanted to be writer, is something I rarely answer. The truth is I have never aspired to be a writer. If someone had said to me years ago that I would create, write and publish a series of stories I would have said they were crazy. I used to believe that to be writer you should be able to produce a fault free piece of writing, spell every word correctly and be a master of grammar. I am not gifted in either spelling or grammar. Every time I handed in written work at school I would be pulled to one side. There was always something wrong and after a while all I wanted to do was avoid writing.

Then I found drama, where I was truly free to use language without the worry of written sentence structure. What I realised about myself through drama was that I have good ideas and discovered many ways to develop them. This eventually gave me the confidence to go back and address my apprehension to write. I trained as a high school drama teacher and conquered the lengthy dissertation during my master’s degree.

When I started Delilah Dusticle I would not have said I was a writer either. I was just going along with a feeling that I wanted to tell a story. When I had finished, I wanted to see if it was any good and I contacted book blogs requesting honest reviews. It is their response to the characters and the stories that has really driven me to keep going. I have now managed to overcome part of my rigid beliefs of what I think a writer should be. I now allow myself the idea that I am a writer, even though I am not a master of spelling and grammar. I rely on editors for that.

So where do ideas come from? A religious person may say it was divine intervention, that I have been gifted the idea by god. Another may point out that at the time I was fairly frustrated with my current work situation. That I had started to question what I wanted and thus I found it from within. A more sceptical friend may say that it was the functions of my brain. I was bored with the current task and I found a way of entertaining myself.

What is astounding for me is not how I got the idea of Delilah Dusticle or where it came from, but my motivation to not let the idea go. Also I am sometimes amazed with myself that I decided to write it as a story as opposed to dramatizing it. I am glad I did. Writing has opened up a new world to me, which is both exciting and challenging.

At this point I can only conclude that I do not know for sure where ideas come from, but perhaps it is what you do with your idea that counts. You can let ideas drift back into your unconscious where it was plucked, or you can mould your ideas to stay in the present.


Wasn't that awesome?! I really got a lot of insight into where ideas come from. I want to thank A.J. so much for being here today. I cannot wait to read her book and have her back for an interview.

A.J. has a nice surprise for us. I am going to put up a rafflecopter form. The winner will receive a smashwords code to get one of A.J. York's books. So just look over to your right and it should be there shortly.

To find out more about Delilah Dusticle, please visit www.ajyork.com 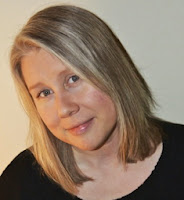 
The first two books in the series on The Delilah Dusticle Adventures are currently part of a Goodreads Giveaway. To enter click the following links: 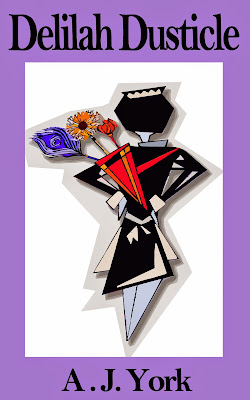 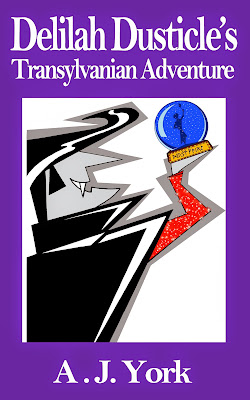